Hi, I was wondering if the LLN program could be applied to offline media players such as VLC or MPC-HC?

I’m not too knowledgeable on the specifics of how LLN works so this could be something very simple or something completely impossible, I don’t know how to gauge that kind of thing.

The reason I ask is because I have a number of movies and television shows on my hard drive (with my target language subtitles) that aren’t necessarily on Netflix. If LLN was available as an offline program to apply to another media player (or even LLN as it’s own media player?), where I could supply the subtitles I have, could easily select/copy the subtitles, easily replay the same subtitle line, and auto pause at the end of each subtitle line, that would substantially increase the potential content that’s available to learn with and not just be limited to what’s available on Netflix.

Again, this might be something that’s essentially connected with Netflix’s system and having it as a separate program might mean completely rewriting the code from the beginning, or maybe it’s something that would only require a bit of tweaking. I have absolutely no idea haha. If this was available as a separate program, I wouldn’t hesitate to pay a good chunk of money for it since it’s such an incredibly useful tool.

Anyway, let me know if this is crazy, already being planned, or just impossible. Thank you! 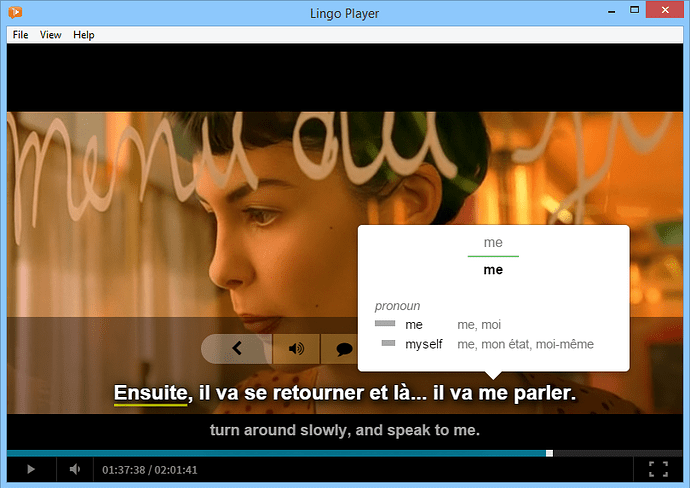 Yet another alternative is LAMP, Lingual Media Player, but it’s no longer in development and the website is dead. If you try to download it now you risk getting adware with it. Be careful if you decide to find it. In my opinion LAMP was the best. It was pretty much what LLN is today, but offline.

Interesting, thank you for the response! I’ll see if these programs may work for me!

Have you tried any of those Ernalzar suggestions or found out other player option that apply to your need?
I know your question was almost one year ago haha