Text mode - only TTS for individual words in Bulgarian?

The text mode is excellent for my Bulgarian studies (same goes for PhrasePump, though sadly there’s very limited option for using the subtitle features). However, while the auto-play and play/stop buttons appear to be activating, I hear no audio for the text.
Only when I click individual words to use the dictionary features, do I get audio (and the best Bulgarian TTS I’ve ever heard, so it’s a shame if TTS text reading is indeed not possible).

Is this a missing feature or a bug?

I tried text mode for the first time today and experienced the same problem with Spanish.

Text mode is in Beta and I never tried it before so I’m also wondering if it’s a bug or a missing feature. In either case, text mode is really cool and has been very helpful to me. If the sentence TTS worked as well, that would be icing on the cake!

I’m enjoying language reactor, the recent changes in the last few months have been really excellent, keep up the great work LR team!

Hi, we changed how audio playback works a bit, if it is still not working, please mention your browser here (chrome/safari/edge/firefox…?), OS (windows, mac, linux) and the language you are learning.

Bulgarian language (with translation to English).
I’m on MacOS Ventura and I have tried Arc Browser, Edge, Safari and Firefox - audio will only play on individual words I click (dictionary lookup). Full sentence audio is not playing, even when the stop and play buttons suggest it should be.

My experience is the same as described by Miths, but with Spanish and Chinese.

Woah, someone is learning Bulgarian. I live in Bulgaria.

We’re doing a big upgrade soon on the catalogues, I think I’ll be able to make proper TurtleTube playlists, and, integrate this course into LR: The Yojik Website

@Miths do you see Bulgarian in the list on the test page?

Text mode is pretty neglected, should handle the case of missing TTS language.

I also live in Bulgaria, which is why I’m learning Bulgarian ;). Ten years, but because my job is in English and my Bulgarian friends are fluent in English, I’ve been embarrassingly slow to learn the language.

I checked the Web Speech Synthesis Demo page, it says " Your browser supports speech synthesis.", but the drop down list of voices doesn’t list language for most of them, so aside from trying some plausible names, I’m not sure how to verify if Bulgarian is supported.
[Edit: Seems like the Daria voice is Bulgarian. Sounds like the same voice used by DeepL, and much more robotic than the one used with dictionary lookups on your site.]
[Edit2: Did some more digging. You’re right, MS Edge does have better voices with their own additional ones. It sounds like the dictionary lookups on your site, and PhrasePump - even when done in my primary non-Edge browser - use the voices Microsoft Kalina Online (natural) and Microsoft Borislav Online (natural). However, regardless of browser, voice still only plays for the dictionary and PhrasePump, not for sentence reading in text mode.]

In any case I hope you maintain the text mode at least in its current form. It’s the most efficient I’ve yet come across to read foreign language texts for learning. The word colors and instant dictionary lookups make it better than eg. Google Translate/DeepL or Readlang.

Thanks for the information. Very helpful! I saw that some updates have already been made, when I’m on Linux/Chromium (with no voices) I now get an error to explicitly tell me that TTS is not available and the TTS UI buttons are hidden. That’s nice to see!

When I use it on Windows 10 with Microsoft Edge everything works nicely, and the voices are indeed really great! However, in Spanish I get an Argentina accent which is quite strong and unique compared to other Spanish accents. Presumably this was chosen because it’s the first listed voice for Spanish. I can see several Spanish voices available in the codepen demo but I couldn’t figure out how to change which one is being used in LR. Is there a way to change the voice or is this not possible currently?

Hey. Sorry, had a few things happening this week.

Right, so I fixed up the bug where TTS would play a sentences from the wrong page(!). The code will now search for any available language voice for any language (only maybe 15 langauges were handled before), and, yeah, there’s a warning. Ognjen says he gets Bulgarian TTS on his Mac, but, you might need to install an additional OS langauge support option.

For supported languages, Edge browser gives great TTS (about 15 languages), which is same/similar to what we use for dictionary/PhrasePump etc. (we use a Microsoft Speech API).

@Ceonsamea The code to select the voice (from voices available in the browser) looks like this:

What it does is:

Yeah, I’ll go through some voices now and try and hand pick some better sounding ones. I’ll try pick a nice neutral Latin-American voice for spanish.

Thank you very much. Text reading works now on MacOS. Very robotic TTS in Arc Browser (and I’m guessing several other browsers) but in Edge it uses one of the two much better Microsoft TTS voices for Bulgarian.
It picks the male Microsoft voice (Borislav), I’m partial to the female (Kalina), but that’s a luxury problem

- both are much better than any other Bulgarian TTS I’ve heard.

I changed the code to select the better voices (Kalina for Bulgarian etc.). Will go online next time we update (probably a few days).

TurtleTube/Youtube catalogue will get a big improvement soon, hopefully will find videos for Bulgarian.

Thank you very much. These improvements definitely make Language Reactor one of the best study tools I’ve found for Bulgarian, even without the subtitle features fully supported (hard to do when the local Netflix doesn’t actually offer Bulgarian subtitles. But perhaps you’ll add HBO Max support in the future).

Okays we got upgraded example sentences for Bulgarian (other langs to follow tonight/tomorrow). These are machine translations of the better Tatoeba English sentences. 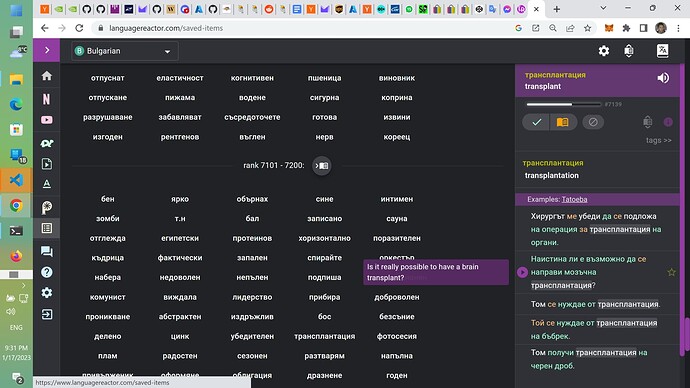 Starting work on chatGPT with translation, TTS, dict, word saving etc., will work for Bulgarian, hopefully all the APIs don’t get too expensive… 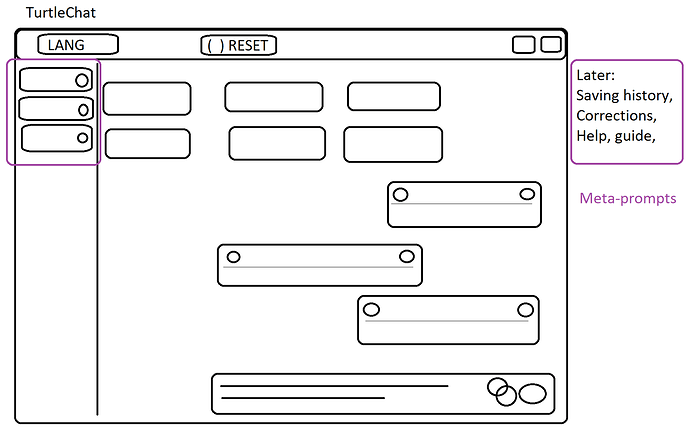