Hey, not sure if anyone else has this problem but I couldn’t find any posts about it beforehand. I refreshed the show I was watching, and suddenly the English subtitles were yellow instead of white. I’m not sure how to change it back and it’s much more jarring to read yellow than white.

Anyone know what to do? Thanks!

I’ve noticed this too, It looks like it is part of an update.

I hope there is a way to use the original colour.

Yeah, it’s part of the update. Not a fan? Think we should revert?

Some more feedback from twitter:
“The color change makes the extension very hard to use, especially for Japanese kanji characters. Please include an opt-out option, this is breaking something that worked great.”

ome more feedback from twitter:
“The color change makes the extension very hard to use, especially for Japanese kanji characters. Please include an opt-out option, this is breaking something that worked great.”

Honestly, I did get used to it after a while, but maybe an option to change colours would be nice.
Other than that, I really like the extension, keep it up!

IMO the visual appearance of subtitles went to shit in the last update.

Weird colors everywhere, and fonts looked different to me. Had to disable. (I’m using it to add Japanese subtitles alongside English ones.)

Please don’t change defaults to this degree in automatic updates. Make the new appearance available through manual configuration. It’s really frustrating when you haven’t done anything and stuff just starts behaving like you’re not expected to and it’s hard to tell why.

Can you send a screenshot? There’s an issue with fonts still, needs to be sorted out ASAP. Somebody posted this on twitter, looks, yeah, well, you are not wrong 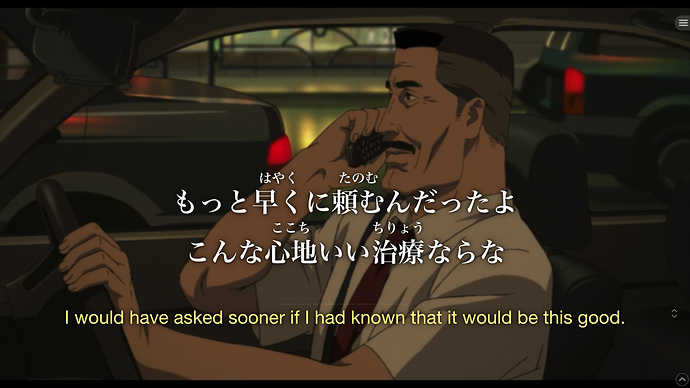 I really hope we can revert the subtitle text back to white. The yellow is not doing it for me.

Reverted to white. Font issue should be mostly fixed, but a definitive fix will come in a couple of weeks.

I would love to be able to put a background on the subtitles to be able to read them more easily no matter what color there is behind. Otherwise, great app, such a shame it’s not on github but then again work has to be rewarded!

Edit: I’m obviously talking about the case where the video is full screen and the subs are on the video and not under it (I think that having the subs under it has two major downsides: 1/ The video is much smaller and the subs are far from the video making it more difficult to follow both 2/ When the number of lines of subtitles varies, the video size will vary accordingly getting smaller if there are more lines and conversely, and this is a bit disturbing.)